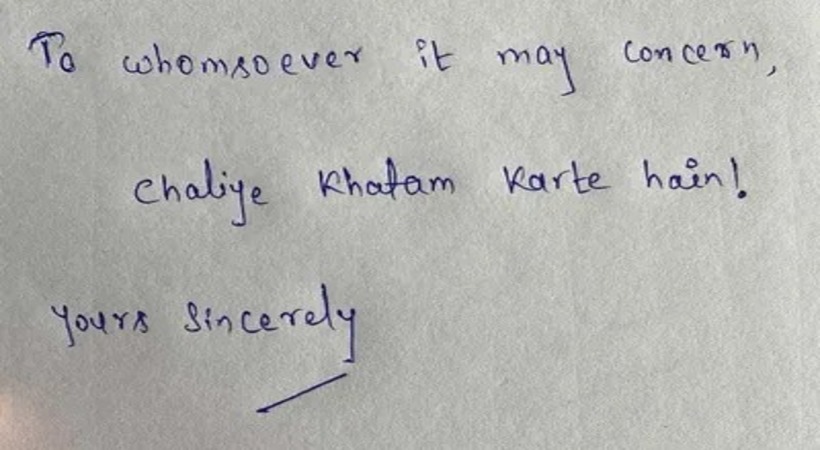 A short and simple 3-word resignation letter has gone viral on the internet, much to the amusement of the netizens. Internet says the letter is crisp and to the point.  Reacting to the viral letter, netizens flood Twitter with their own resignation anecdotes.

The picture of the resignation letter was shared on Twitter by Kaveri with a caption, “Short and sweet.”  It literally has three words, ‘Bye-bye Sir’ – and we’ve not come across a better goodbye. The post was flooded with several comments from the users. The subject of the letter was ‘Resignation Letter’ and its body had only 9 alphabets and they were ‘Bye-Bye sir’. Of course, since this is official paperwork, the person who sent it ensured to sign the letter. Honestly, it has all the elements of a formal letter and no one can really complain. Also, the intention behind the person’s resignation letter is not revealed.

Netizens had a lot to say about the viral resignation letter. Some users took to the comments section to share their resignation stories. Some users shared screenshots of resignation messages sent to them by their subordinates.

One user commented,” Though I think just bye would have been enough instead of bye-bye,” another user commented, Very Good and Simply Answer to leave the company, no need to explain all things to them. Just it’s enough. Good thought. If u don’t like just leave, if u like stay and stand with ur company and do hard work to develop company and feel it’s my own.” “Not Twitter, Iam sticking on to something else”: Elon Musk reveals what’s in his mind